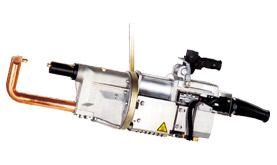 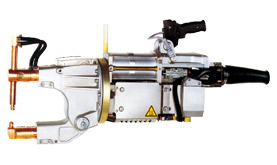 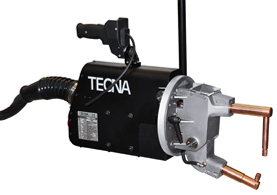 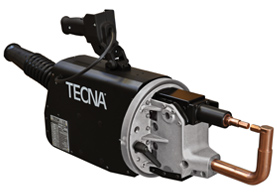 There are applications and situations where the MFDC resistance welding is the best choice available. Although there are significantly higher initial prices, the overall cost of using MFDC over single and three-phase SCR control may actually be significantly lower.

Significant Energy Savings - For plants that cannot purchase more electrical power, the MFDC approach may allow you to do more projects with less energy.

lmproved and Consistent Power Factor - The MFDC load appears to have unity power factor, which would then reduce penalties assessed by the power company.

Automatic Load Distribution - The MFDC load is evenly distributed across all three phases. The bank of capacitors that are found on the MFDC system allow for current to be drawn from the bank as well as from the line thus reducing peak line currents.

Welding is Tolerant of Electrical Line Disturbances - The energy reserve of the capacitor banks will smooth out line notches and line spikes even while welding is taking place.

Precise Welding Current Control - The MFDC utilizes IGBTs for switching. These are turned on and off at the rate of 400 to 2000 times per second. By controlling both the turn on and turn off, the MFDC can determine the current to control. Conventional controls utilize SCRs for switching. These are turned on by the weld control but then remain conducting until the line voltage crosses the zero point during the base frequency line cycle. Because of this, conventional single phase controls must use a predictive algorithm rather than a deterministic approach. Also, if an under or over compensation occurs on one of the cycles, the conventional AC control will have to wait until the next period of the base frequency whereas the MFDC need only wait a fraction (1/20th nominal) of that time.

Attains Target Current Immediately - DC systems of the SCR type have a rise time prior to its steady state. Since the MFDC is so responsive, it is possible to create full phase firing during the natural rise time to lessen that period of time.

More Process Friendly - The MFDC eliminates undesired inter-cycle cooling periods that exist in AC resistance welding processes. Welding therefore can occur faster which would then reduce heat waste and the problems associated to eliminating that waste. Low Inductive Loses in Secondary Circuit: Due to DC current, the inductive losses in secondary circuit because of the magnetic metal content in between secondary circuit are minimized giving accurate control on welding current.

Higher Current Deliveries : lmproved short circuit currents up to 30 KA are useful for welding materials like Brass, Copper, and Aluminum.

Lower Cycle Times : As the welding periods are in milliseconds and inter cycle non activity is avoided, thus cycle time of weld is reduced resulting in higher productivity.

Lower Weight and Size of the equipment : This increases the maneuverability of the machine resulting in reduced fatigue to the operator.